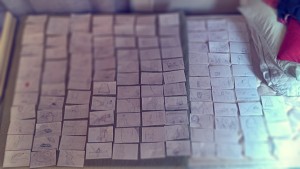 I drew a little over 100 storyboards for this short.

I’ve jumped in to the deep end.

I’m producing/directing/writing/acting “Patience,” a fictional narrative short film based on my experience with cancer. Today is one month from my last chemo treatment, but I’m determined to make this short film.

I hope to make the Top 20 of the LA Film Prize, a film festival unlike any other in the world, and have it premiere here in Shreveport, LA. Rouch cut is due July 9th, I only have 3 weeks left, but I have storyboarded the entire film so I know every shot I need to get so I don’t waste any time. Now I just need to get it.

I believe my animation background is playing a vital role in my ability to make this short and I hope Spielberg is right too:

This project would not be possible without the help of so many of my friends. “Patience” is such a personal story to me I have leaned heavily on the feedback of friends and it has made the film better. We have a long way to go in a short amount of time, but I believe we can get it done. (These rules really apply to my situation right now, click here.)

I pulled a few strings and was lucky to film the first scene with Veronica Cartwright. It was a great experience but intimidating to write words for, act with, and direct someone who has worked with directors from Hitchcock to Ridley Scott. I learned so much from her and that scene. She was a great help to me in navigating this unfamiliar territory that she has traveled so many times.

When I went through chemo I was watching many film’s behind-the-scenes footage and I’m trying to collect some from this short to share. Let me know if there’s something specific you want to know about the production.

I hope to post updates as production progresses. Subscribe with your email address to my website in the top right corner of the sidebar to get automatic updates. 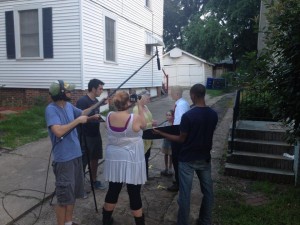 Filming a take with Veronica.